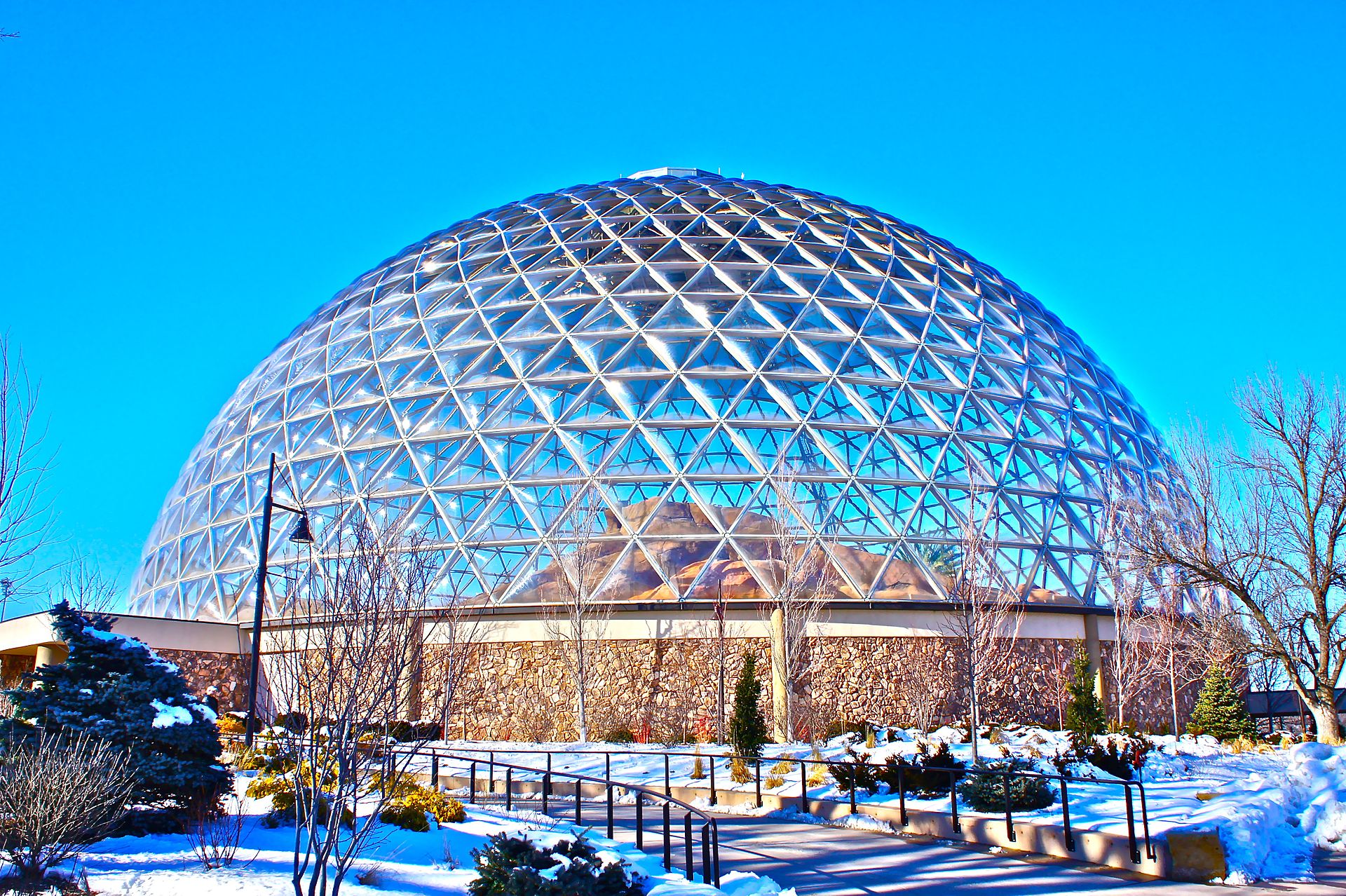 A wonder for architectural photographers and zoo-goers alike, the zoo boasts the largest glazed geodesic dome on the planet. Photographing the dome in its entirety from some angles requires a combination of skill and very wide angle lenses. Capturing its architectural beauty is what sets the professional photographers apart.

The “Desert Dome” is home to the world’s largest, climatically-controlled, indoor desert habitat.  Within the 42,000 sq.ft. dome are features from several desert regions – among them the African Namib Desert, the Sonoran Desert, Australia’s Red Central Desert. The architecture of the Biodome and the patterns it creates are stunningly beautiful.
There’s lots to photograph aside from the architecture. The landscaping is breathtaking.

A 50-foot mountain, a cactus forest, sand waterfall, desert flora, canyons, and more than over 50 desert animal exhibits occupy the $16.5 million project. Beneath the main exhibit lies the “Kingdoms of the Night”, the world’s largest indoor nocturnal environment.

Work on the dome commenced in October 1999. 159 30-foot-deep belled piers were drilled into the ground along with 900 feet of underground reinforced concrete pipe. Two 41,000 sq. ft. base slabs make up the upper and lower exhibit floors surrounded by the 137 ft high dome, comprised of 1,760 quarter-inch-thick acrylic, triangular-shaped panels . Over 250 tons of reinforcing steel and 10,000 tons of concrete were laid before the dome opened to the public in March 2002.

Architectural photographers who enjoy Art Deco will appreciate this museum. Beautiful structural designs are blended with memories of a past era at The Durham Museum.Housed in one of Omaha’s treasured architectural assets, Union Station, The Durham Museum gives visitors an enthralling look into the history of our state with a broad range of traveling exhibits – both historical and cultural, from science to industry and more.

Los Angeles architect Gilbert Stanley Underwood designed the station which opened its doors in 1931. The art deco design was intended to denote power and speed, setting it distinctly apart from other train stations of the time.

The Museum was revitalized under a project lead by Charles Durham and in 2016, was designated a National Historic Landmark. Architectural photographers will be awed by the Museum’s massive Photo Archive which holds more than 800,000 images from photographers the world over spanning from the early days of photography in the 1860s up to the 1990s.

Union Station in Omaha was initially constructed by the Union Pacific Railroad company to showcase its headquarters.  It remains one of Omaha’s most  iconic structures, and is now listed as a National Historic Landmark.  The station is also considered one of the premiere showcases of art deco architecture in the US.

The structure most often captured by architectural photographers is nicknamed the “Tower on the Plains,” the Nebraska State Capitol features a 400-foot tower. — From its observation deck on the 14th floor the public can enjoy spectacular views of the city . Architect Bertram Grosvenor Goodhue was the designer of the tower, which opened its doors in 1920.

Landscape architect Ernst H. Herminghaus designed the surrounding gardens in 1933.  Prime views of the tower from a distance of several blocks were offset by a quartet of views oriented towards the corner pavilions. The Capitol building joined the registrar of National Historic Landmarks in 1976 and its extent broadened in 1999.

The building’s architecture and art have long been a source of pride to Nebraskans.

Architectural Institute of America, Nebraska honored Dan Worth, FAIA, principal with BVH Architecture in Lincoln, with its highest award for  his distinguished work in historic preservation.

With more than 250 National Park Service preservation projects under his belt, Worth was awarded the Harry F. Cunningham Gold Medal for Architectural Excellence.

Perhaps Worth’s most notable project in Nebraska is the exterior restoration of the Lincoln State Capitol, where Worth developed a unique experimental approach to revealing and remediating deterioration of the limestone facade. 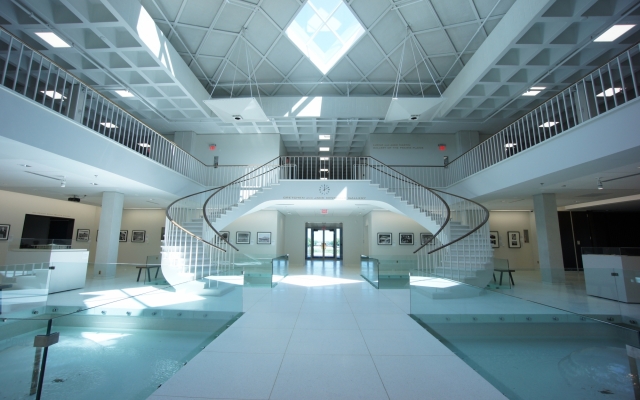 Stuhr Museum of the Prairie Pioneer

Architectural photographers will find lots of interesting angles to capture the contemporary interior design. The beautiful symmetry of the curved staircases, the interesting use of glass and steel balustrades, water features and more.BVH Architecture provided the engineering and architectural services to assemble an extensive master plan for the rehabilitation and restoration of the Stuhr Museum of the Prairie Pioneer. The Museum is located in Grand Island, Nebraska.

The museum and surrounds were designed in 1963 by acclaimed modernist architect Edward Durell Stone and his only remaining building in Nebraska.

A collaborative effort, engaging the museum staff, foundation and governing board was deployed to ascertain the museum’s future requirements for collections and interpretation. Critical to the goals and mission of the museum was to craft a sensitive architectural design that not only retained the museum’s identity as a Nebraska landmark but also represented its importance as a cultural center in the community. The ambitious plan included restorative recommendations for the building exterior, structural stabilization, interior finishes, as well as HVAC, fire protection, accessibility updates and life safety modifications.The museum became included in the National 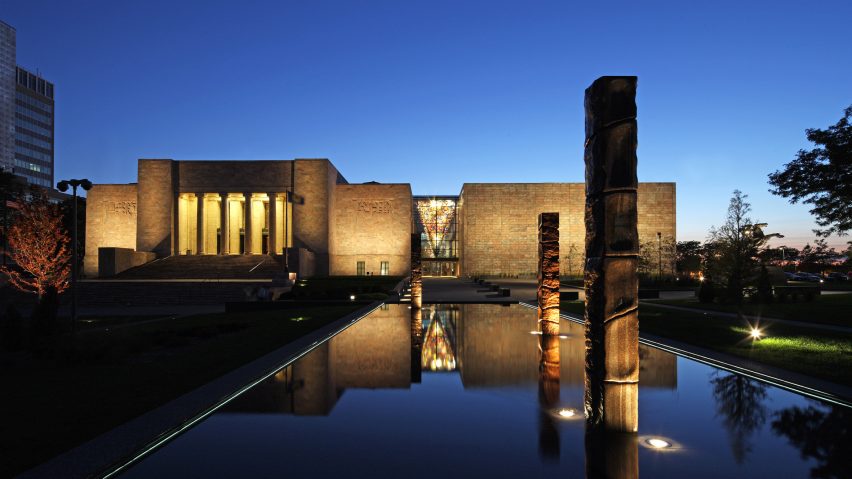 Architectural Photographers who appreciate Art Deco will enjoy capturing this truly beautiful Art Deco building, commissioned in 1931 by Sarah Joslyn, it commemorates George Joslyn, her late husband.In the late 30s it came to fame when listed as one the country’s finest 100 buildings.    it remains Nebraska’s largest art museum and is considered one of the loveliest Art Deco buildings in the U.S.

The Walter and Suzanne Scott Pavilion, is a 58,000 square-foot addition that completed in 1994.

Included in the Museum are galleries, a concert hall, education technology showcase, fountain court, lecture hall and classrooms.Sculpture and Discovery Gardens were added in 2009.

Offering lots of interesting angles for architectural photographers, the Kerrey Pedestrian Bridge is the first pedestrian and bridge to actually span two states. Crossing the Missouri River into Iowa, the eye-catching architecture of the snaking, 3,000-foot long, suspended walkway gives pedestrians an amazing view of Omaha’s skyline and the feeling of being almost airborne. It is one of the longest bridges ever constructed for cycling and pedestrian use.

The two towers support a unique snaking 506-foot primary span and 253-foot end spans. It connects cyclists and pedestrians to 150 miles of trails on both sides of the bridge.
As the Kerrey bridge crosses over the Missouri River it also traverses the border between the two states. The act of standing midway across the bridge with one foot standing in Iowa and the other foot in Nebraska is referred to as “Bobbing.” It might just be the most photographed spot in the country when it comes to feet. 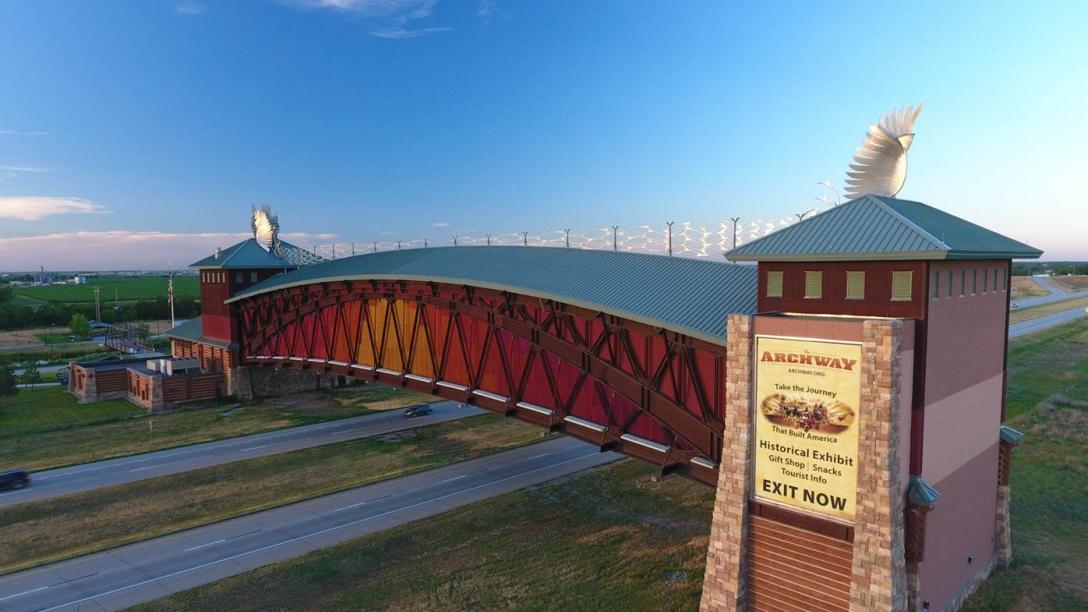 Architectural photographers can experience and capture the American Spirit of Adventure.Since the age of the dinosaurs, the trail along the Platte River through Nebraska has been a migratory route cross the state of Nebraska and into Colorado. the Archway pays tribute to the American spirit of adventure. Spanning I-80, at Exit 275 on the major highway linking East and West coasts, the Archway celebrates the many adventurers who used the river’s path in the past; those who helped build the nation, and the people of today who’ll shape our future.

The archway is the brainchild of Frank Morrison, the 31st Governor of Nebraska, who served in the 60’s. It was his vision to architect a monument to the adventurers and explorers who followed the Great Platte River and helped to develop America.

The early settlers who first traveled the Oregon Trail were both daring and courageous. The trail played a key role in the California Gold Rush of 1849, the migration of the Mormons in search of religious freedom, the formation of the Pony Express, and the enterprise that constructed the Transcontinental Railroad and later the Interstate Highway System.

The engineers in charge of constructing the Archway faced the unique challenge of erecting a 1,500 ton structure that would span one of the most traveled Midwestern arteries without disrupting the usual flow of traffic.

Architectural photographers interested in Green design and construction techniques will find the architecture of particular interest.

The expansive curved windows are one’s first impression of the building. The innovative way that lighting is managed through woven metal mesh gradually controls and diffuses sunlight in a way that optimizes the visitor’s viewing comfort.

Not only is the architecture aesthetically pleasing but the Green construction is impressive. Its ability to minimize maintenance and energy costs is coupled with excellent longevity and recyclability.

The extraordinary architecture was designed by Robert A.M. Stern Architects and constructed in 2008. Home to the world’s greatest collection of quilts accessible to the public, the eco-friendly brick and glass is an eye-catching landmark in the Lincoln Nebraska.

The idea of a International Quilt Study Center was seeded back in June 1997 when Nebraskan natives, Ardis and Robert James gifted almost 1,000 quilts to the Nebraska-Lincoln University.